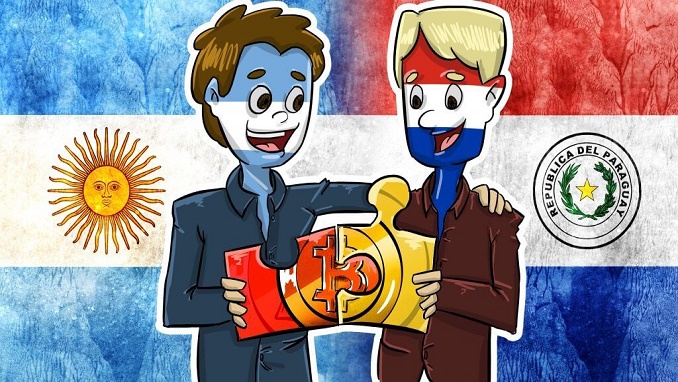 Argentina and Paraguay have reportedly settled an export deal using Bitcoin (BTC), according to a news report published on Thursday, February 14. Paraguay recently bought fumigation and pesticide products worth $7,100 from a supplier in Argentina and used bitcoin to settle the transaction.

The use of BTC to pay for imported products is a first for the countries, and according to the news report, involved using bitcoin to purchase the products and then converting the crypto into Argentine pesos. The fiat was then used to settle accounts of the supplier of the chemicals.

To facilitate the crypto payments, Argentina utilized the services of Bitex, a South America-based financial services provider, which provides for the processing of bitcoin payments. Bitex is part of the Simple Export project established by the Argentine government, whose aim is to facilitate for the export of goods and services valued at $15,000 or less.

The company’s chief marketing officer Manuel Beaudroit, says that the government has contracted the Latin America crypto firm with the aim of using it to introduce greater efficiency within the cross-border payments. Bitex’s collaboration with Argentina’s mainstream financial sector dates back to May last year when the crypto company joined Masventas bank to work on a cross-border payments solution.

At the time, Masventas announced plans that it said would see it create an alternative system to the global interbank network SWIFT. As part of the project, Bitex was expected to provide the needed infrastructural ecosystem that would allow for bitcoin transactions.

While most of Latin America has faced growing financial difficulties resulting from poor governance and other economic crises, the use of cryptocurrency has seen considerable growth over the last year. As a result, the use of bitcoin, and other cryptocurrencies, in the region continue to pick momentum.

The travel card is used by more than 7 million people in roughly 37 locations within the country and is a result of a partnership between Bitex and Alto Valje- a platform that helps the public to load their cards with funds. In Paraguay, the government supports a crypto project dubbed the “Golden Goose Project” after signing a deal with a blockchain firm based in South Korea in 2018.

These developments add to the growing number of bitcoin ATMs being launched in several countries across Latin America to aid in further adoption.