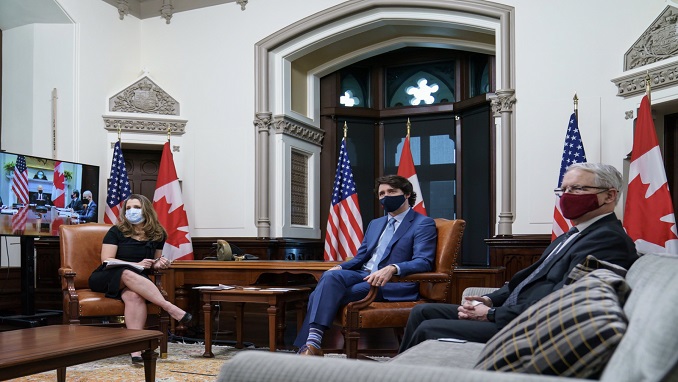 Canada is being outpaced on the international stage when it comes to green investments in electric vehicles and clean energy, environmental groups say.

The federal government has an opportunity to change course in about three weeks, when the Liberals table their first budget in over two years, the International Institute for Sustainable Development (IISD) argued in a new analysis endorsed by nine other climate action, ecology and conservation organizations.

“Canada’s international peers are ramping up commitments for green recovery, including significant investments from many European countries. To keep up with our global peers, sufficient investments and strengthened regulations must work in tandem to rapidly decarbonize all sectors of the Canadian economy,” states the analysis, “Investing for Tomorrow, Today,” published March 29.

Deputy Prime Minister and Finance Minister Chrystia Freeland confirmed last week that the federal budget will be tabled April 19. The Liberals are expected to propose between $70 billion and $100 billion in fiscal stimulus to jolt the economy out of its pandemic doldrums.

The government has also proposed a wide range of green measures in its new climate plan released in December — which the think tank called the “most ambitious” in Canada’s history — including energy retrofit programs, boosting hydrogen and other alternative fuels, and rolling out carbon capture technology.

But the possible “three-year stimulus package to jumpstart our recovery” mentioned in the fall economic statement came with the caveat that the COVID-19 virus would have to be “under control.” While vaccines are being administered, Canada is currently dealing with a rise of highly transmissible variants of the virus.

Freeland spoke with United States Vice-President Kamala Harris on March 25, stressing the “need to support entrepreneurs, small businesses, young people, low-wage and racialized workers, the care economy, and women” in the context of an economic recovery.

U.S. President Joe Biden is contemplating a climate and clean energy recovery plan that could “exceed US$2 trillion,” White House officials told reporters this month. “Per capita, that is over eight times what Canada has announced so far for climate-related spending in the wake of the pandemic,” the IISD-led analysis stated.

Biden’s election platform commitment of $508 billion over 10 years in clean energy was also seen as “significantly higher per capita than Canada’s recent commitments.”

Biden is contemplating a climate recovery plan that could exceed US$2 trillion. Per capita, that is over 8 times what Canada has announced so far for climate-related spending in the wake of the pandemic, according to a new analysis from green groups.

Since October 2020, Canada has announced $36 billion in new climate-focused funding, the groups found. Canada announced $400 million over five years this month for a new network of bike lanes, paths, trails and bridges, the first federal fund dedicated to active transportation.