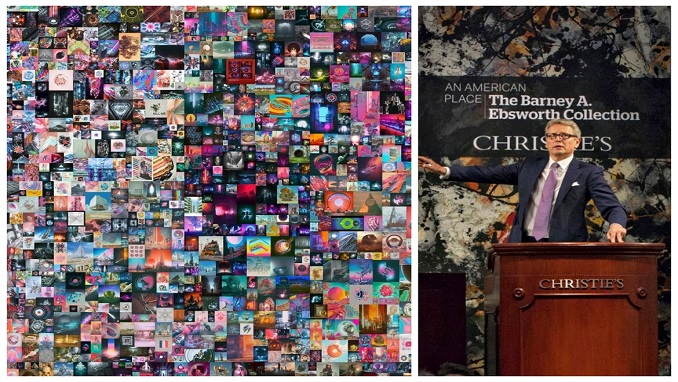 Digital art, for decades, does not hold its value remotely as well as traditional fine art. The ease of duplication makes provenance documentation nearly impossible. But with the advancement of blockchain technology, art authenticity and ownership is no longer a hindrance as Christie’s takes the lead in dabbling in the crypto art market.

Everydays: The First 5000 Days by Mike Winkelmann, better known as Beeple, is a collage of images taken every day since 2007, for 5000 days straight. Not only does the work provide a glimpse into the artist’s creative journey from his early days, it also marks Christie’s first foray into accepting cryptocurrency in an auction.

The standalone online sale runs from February 25 to March 11 and bidding starts at US$100. The auction house lists the estimate for the work as “unknown.”

“We’re replacing our typical ‘estimate on request’ with ‘estimate unknown.’ We’re breaking such new ground with this piece, your guess is as good as ours,” said Noah Davis, specialist in Post-War & Contemporary Art at Christie’s New York.

Christie’s started tapping into the realm of blockchain back in 2018, as it hosted a summit to explore both opportunities and challenges presented by the nascent technology. In November 2018, the auction house also debuted an auction, in which all sales were recorded and digitally encrypted by Artory, a blockchain-backed digital registry.

The purchases were certified by Artory, which then recorded such information as transaction date, price, title, and description in a digital certificate for every lot sold. Each buyer was given a registration card, with access to the encrypted information on the registry.

The 42-lot sale fetched a total of US$317.8m, headlined by seminal American artist Edward Hopper’s Chop Suey, which realized US$91.9m after fees. The oil on canvas work marked a new record for the artist, and stands as the most expensive price ever paid for any pre-war American art.

So what exactly is blockchain? Blockchain is a ledger of decentralized data that is stored permanently on numerous computers. Transaction records are stored in a sequence of blocks, which form a time-stamped and immutable chain, making it impossible to alter the data and hence considered a more secure and reliable technology.

It is also the technology behind the cryptocurrency Bitcoin and the rest of the non-fungible token (NFT) network. From a secondary art market perspective, it verifies the authenticity and provenance, as well as the rightful ownership of an artwork.

The NFT technology enhances the transparency of the transactions through a public but secured database. The auction house deems it an innovative strategy to appeal to the millennials, yet only time will tell whether or not cryptocurrency will be widely accepted by collectors.

The successful bidder will be given the artwork file encrypted with a digital signature from the artist, which is embedded in a smart contract on the Ethereum blockchain. The unique NFT is issued by MakersPlace, an online marketplace for digital creators.

While the new owner of Beeple’s work will have the option to make payment of the hammer price in the cryptocurrency Ether, but “for the avoidance of doubt,” Christie’s requires the buyer’s premium to be settled in US dollars.

A collection of digital artworks, entitled The Complete MF Collection by Beeple, was sold on NFT marketplace Nifty Gateway a few months ago. The collection came with an always-on display and a physical token containing the digital artworks, which was eventually sold for US$777,777.

The fast growing NFT space is met with skyrocketing demands. According to Cryptoart.io, February 2021’s monthly volume has reached US$41.4m to date, making up for more than a third of the accumulated sale of US$126.2m.