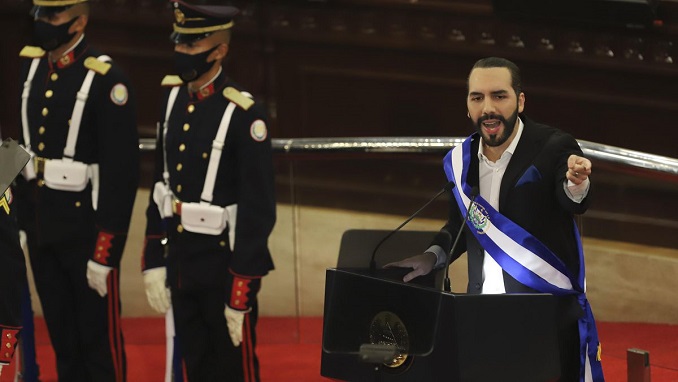 El Salvador President Nayib Bukele said Saturday he will introduce a bill to Congress this week for the country to formally adopt the bitcoin as a legal tender, in hopes that being the first country to officially use the cryptocurrency will attract investment and allow more residents to take part in the formal economy.

“Bitcoin could be an innovative idea that could launch El Salvador into a more optimistic future,” Bukele said Saturday during a virtual speech to a bitcoin convention in Miami, Florida.

Adopting bitcoin in the short term would create jobs and provide financial inclusion to thousands outside the formal economy, Bukele said, like the 70% of Salvadorans who do not have a bank account, but did not give specifics on how the new policy would work.

“It could also attract investment,” Bukele said—with a market cap of $680 billion, if just 1% of bitcoin is invested in El Salvador, the country’s GDP would surge by 25%.

Bukele argued bitcoin would be particularly useful in El Salvador, as roughly one-fourth of the country’s GDP comes from money sent home by the millions of El Salvador citizens who work abroad and send back more than $6 billion per year.

1. Great weather, world class surfing beaches, beach front properties for sale.
2. One of the few countries in the world with no property tax.
3. No capital gains tax for #Bitcoin, since it will be a legal currency.
4. Immediate permanent residence for crypto entrepreneurs. https://t.co/j3eugJQCMd

“We hope that this decision will be just the beginning in providing a space where some of the leading innovators can reimagine the future of finance, potentially helping billions around the world,” Bukele said Saturday.

Bukele has teamed up with digital wallet Strike and is working with CEO Jack Mallers to help the country legally adopt bitcoin. El Salvador has used the U.S. Dollar as its official currency since 2001.

Bukele’s New Ideas party and allies won a supermajority during March midterm elections. Critics have expressed concern about the notoriously volatile nature of bitcoin prices and the massive amount of energy bitcoin burns. El Salvador is the smallest country in South America, and nearly 40% of the population lives below the poverty line.