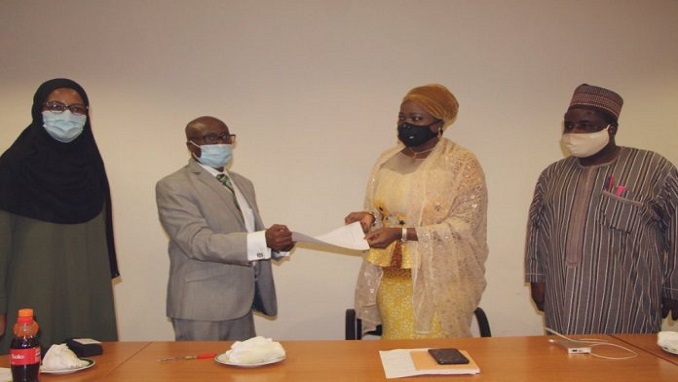 The Islamic Development Bank (IDB), in collaboration with the International Organisation for Migration (IOM) is partnering with the NIDCOM (Nigerians in Diaspora Commission) on Diaspora Humanitarian Sukuk, Diaspora Remittances, capacity development programmes as well as trainings and research.

Sukuk are financial products whose terms and structures comply with Sharia Law, with the intention of creating returns similar to those of conventional fixed-income instruments like bonds.

However, unlike conventional bonds (secured or unsecured) which represent the debt obligation of the issuer, a Sukuk technically represents an interest in an underlying funding arrangement structured according to Sharia, entitling the holder to a proportionate share of the returns generated by such arrangement and, at a defined future date, the return of the capital. It prohibits all forms of conventional interest income, as well.

Disclosing this development in Abuja during a strategic meeting with the Chairman/CEO of the Nigerians in Diaspora Commission, Honourable Abike Dabiri-Erewa, the Regional Head of the IDB, Dr. Mamoud Kamara explained that the Diaspora Humanitarian Sukuk will help assuage the sufferings of Nigerians, particularly those who have lost their means of livelihood and were struggling for survival.

He noted that the initiative involved a multilateral banking strategy that included the World Bank, the African Development Bank among others. As a result, the strategy was primed to be very inclusive and global in structure and scope.

Dr. Kamara was clear about the guarantees of the strategy stating that the Diasporan Remittances were going to guarantee discounted rates, insurance, infrastructure, projects and crises relief.

These were what gave him the confidence to declare that the partnership will have very positive impacts on the target demographics and the country as a whole especially as there is precedence of successful projects implemented previously in countries like Israel, India and Ethiopia.

Also present at the meeting, the National Project Officer of the IOM, Ms Ukamaka Osigwe, gave weight to the assurances of Dr. Kamara. She said the Organisation was working closely with IDB and was going to continue to do so to see to the successful take-off of these initiatives as outlined.

In her response Dabiri-Erewa praised the laudable objectives of the partnership and the team behind it. She immediately suggested that a Committee with representatives of partners be constituted within a week to be tasked with the responsibility of fashioning out the modalities for the full implementation of these initiatives as put forward by the IDB and IOM respectively.

She was insistent on the need for mainstreaming Migration in such a way as to regularise incidences of irregular migration.

In addition, she stressed the need for what she referred to as “Diaspora Data Mapping” as well as the necessity for strong emphasis on research and development in the critical area of diaspora needs and immigration. Then, she initiated the meeting of the recently inaugurated Ad-hoc Committee for the establishment of a National Diaspora Investment Trust Fund for NIDCOM. It is the first Trust Fund of its kind in the country.

This strategic meeting was at the behest of the newly appointed Federal Capital Territory (FCT) Diaspora Focal Point Officer, Ms Sarah Areo David and was applauded for the positive outcomes and the potential for success that the partnerships and initiatives raised held for the future of Nigerians in the diaspora and their families, friends and businesses back home.