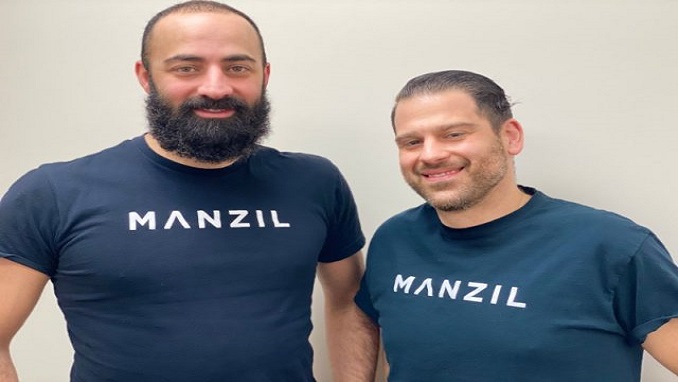 It’s a scene you sometimes see in the Middle East, but one that likely doesn’t occur too often in Canada. Late in the afternoon, Jewish and Muslim workers at Manzil drop what they’re doing and head to a quiet area in their office, face east and silently chant their Jewish and Muslim prayers.

Chayim Kirshen is a Jewish employee at Manzil, its chief technology officer, in fact, who davens Mincha.

Mohamad Sawwaf is co-founder and CEO of the company, whose business it is to provide Sharia compliant financing for Muslims entering the housing market. He’s one of a group of Muslims at Manzil who engages in Dhuhr (afternoon prayer).

Kirshen revels in the diversity and collegiality of the people who work at Manzil.

“The founders include a Muslim (family background West Bank, Palestine), a Baha’i from Iran, and to be honest, I’ve never asked the CFO (chief financial officer) what his background is,” Kirshen says. “We have Palestinians, Gazans, a Franco-Tunisian, Egyptian, Moroccans and more, all working together to help service their community. We’re slowly healing the world by creating halal financial services for Muslims, and even internally helping to rebuild the bridge of peace and love between Muslims and Jews.”

The diversity in the company doesn’t end there. It turns out that the majority of investors in the privately-held company are not Muslims, they’re Christians and Jews. It’s something of a Canadian success story – a company that serves a niche clientele, helping Muslims get into the home ownership market while bringing together people from diverse backgrounds.

Kirshen, a religious Jew who wears a kippah and whose tzizit are readily visible, said he was attracted to the company because it attempts to find creative solutions that help people. He wanted to do his part.

“At the end of the day it offends me that there are people locked out of the financial system,” Kirshen said.

Under Islamic law, charging interest is forbidden, Sawwaf explained. That has prevented many Canadian Muslims – and there 1.3 million – from owning homes since for most people, home purchases are financed by interest-bearing mortgages.

Kirshen, who was born in Toronto but spent much of his childhood in Winnipeg, said that prior to joining Manzil he worked in multiple startups, writing software, helping them scale up and working on cyber security. He approached Manzil for a job and joined the company in November 2019 on the suggestion of his buddy, Sam Holako, a Baha’i from Iran who co-founded the business.

Kirshen believes the kind of collaboration and collegiality on display at Manzil aren’t common enough.

“You don’t see enough of this here. You see it more in Israel and the West Bank,” he said. “There’s a ton of cross-cultural commonalities. A crazy amount. There are religious similarities, cultural similarities,” he said, pointing to the concepts of kashrut and halal, the circumcision of boys and the prohibition against charging interest.”

“Working with Muslims was never an impediment to joining the firm,” he continued. “We know there’s strife between our communities. If Islamic mortgages happen and Jews help, it’s a sign for peace that the two sons of Abraham get together and that means Muslims can get mortgages. Everybody benefits and I’m doing my bit for world peace.”

“We would say it’s tikun olam (repairing the world),” he added.

“I would call it a culture of acceptance,” said Sawwaf, whose family hails from Ramla, in Israel.

“As to the reception among potential clients of having a Jew playing a prominent role in the company,” Sawwaf said. “I tell Chayim that if there’s push back, I don’t want them as clients.”

“It’s about keeping an open mind,” he added. “It’s about bridges being built.”

As to the issues that could cause friction, such as the conflict in the Middle East, Kirshen said, “It’s not a defining piece of our relationship. We can agree to disagree.”

“It’s not a conflict with the religions,” Sawwaf said. “It’s a conflict in politics.”

And that’s not a factor when it comes to doing business. Quoting Holako, Sawwaf said, “It took Jews and Christians to bring Islamic finance to us.”