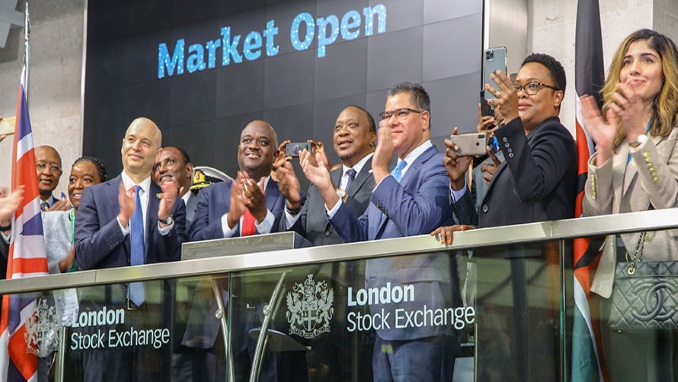 Kenya’s first green bond has been cross-listed at the London Stock Exchange in a ceremony that saw President Uhuru Kenyatta ring the bell to kick off its trading on Monday.

President Kenyatta urged United Kingdom investors to use Kenya as a gateway to investing in Africa and as a bridge to the continent’s emerging single market of more than 1.2 billion people under the African Continental Free Trade Area (AfCFTA).

“Kenya is one of the top ten fastest growing economies on the continent and also one of the most pro-business nations in Africa,” he said.

The President is in London to attend the UK–Africa Investment Summit as UK seeks to boost trading ties with Africa after Brexit.

“There is no better place to appreciate the realities of global economic activity and investment trends than this trading floor,” President Kenyatta said.

The Sh4 billion bond by British property developer Acorn Holdings, which was first listed at the Nairobi Securities Exchange last week, is the first Kenya shilling denominated corporate green bond to be listed in the United Kingdom.

The Nairobi-based developer intends to use the funds raised to build eco-friendly hostels for 50,000 university students in Nairobi under the Qwetu brand.

The President said a policy framework to enable the country to issue a sovereign green bond and strengthen its position as a regional financial hub has been finalised.

“I invite the LSE to continue working with Kenya towards achieving this goal,” he said.

Mr Kenyatta also commended LSE for setting up a dedicated green bond segment in response to the global need for climate smart infrastructure.

“I note that to date the LSE has admitted over 200 bonds from across the world, raising over 33 billion Pound Sterling worth of capital for sustainable development,” he pointed out.

President Kenyatta observed that green bonds provide a great opportunity for African countries as well as those from the Caribbean and the Pacific region, which are at great risk from the effects of climate change, to access large-scale capital for sustainable growth.

Following the decision to withdraw from the European Union, President Kenyatta said the UK has a renewed mandate to build even stronger investment partnerships with Africa. UK’s Secretary of State for International Development, Mr Alok Sharma, said the cross-listing of the green bond was backed by UK regulation environment and partial guarantees for investors.

“This is a landmark moment here as well as in the whole of London for we are here today because of the UK-Africa Investment Summit. This is about making a huge difference and presents the UK as the partner of choice for Africa. It is also wonderful seeing the economies of Africa presented as partners of choice for the UK,” Mr Sharma said.

Acorn Holdings CEO Edward Kirathe said the listing of the green bond at the LSE has opened the way for Acorn and other Kenyan businesses to access the huge pools of capital available in the international market.

African leaders from 21 countries are attending the first UK-Africa Investment Summit in London, less than two week before Britain leaves the European Union on January 31.