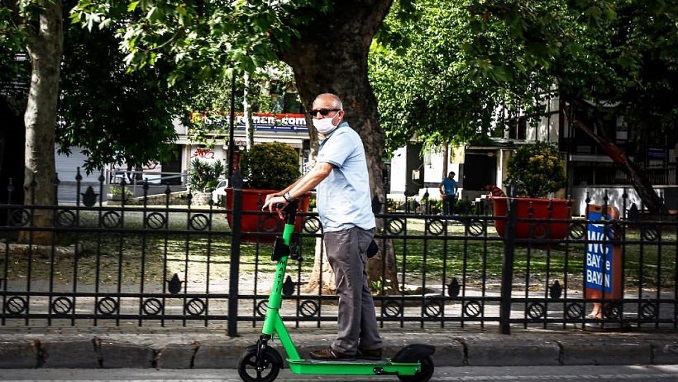 After introducing Turkey to the micro-mobility initiative that’s now trending in the country and emphasizing the importance of decreasing the air pollution created by conventional vehicles traffic, the electric scooter sharing initiative Martı is now leading Turkey’s green wave toward the more sustainable transportation alternatives.

The young Turkish entrepreneur Oğuz Alper Öktem, the founder and CEO of Martı, has recently talked about the huge steps his company is taking to protect nature and minimize the environmental impact of gas emissions from traffic.

Asked about how effective Martı is in its fight against the climate crisis, Öktem underscored the active role that his company is playing in reducing the impact of transportation on the air pollution and climate crisis by using green and sustainable vehicles.

According to him, in the three years of operating since its founding in 2019, Martı’s e-scooters have prevented 7 million kg of CO2 emissions, which, according to Öktem, equals the impact of planting more than 300.0000 trees.

According to some estimates, Martı will prevent carbon emissions equivalent to 6.6 million trees by 2025 or, in other words, it will contribute to nature as much as one percent of all the trees in Turkey contribute to protecting the environment,

In that sense, Öktem underlines that one of Martı’s most important sources of motivation is leaving a better world for future generations is.

Pointing that his company also attaches huge importance to recycling, Öktem noted that they do not immediately throw away e-scooters, mopeds, and spare parts that have become unusable.

He explained that there are several waste management and recycling companies that Martı’s working with in carrying out creative projects. In addition, Öktem mentioned again the expansion plans they’re working on by offering EVs in its fleet on top of the already popular scooters and mopeds.

Speaking at the 2021 ‘Environmentally Friendly Cities’ panel, Martı’s founder shared his plans for the future of urban transportation and touched on important points such as the inevitability of using alternative transportation methods to deal with the issue of the carbon emission created by vehicle traffic.