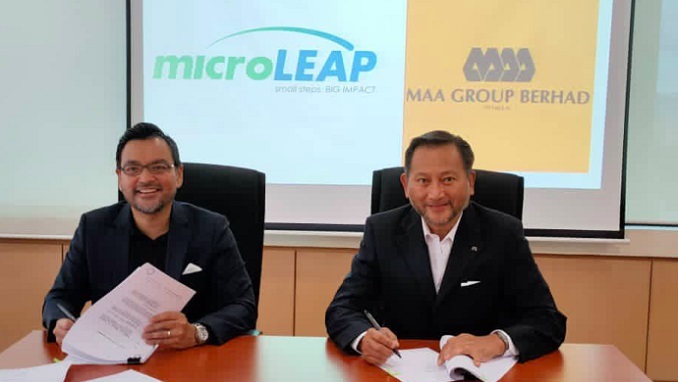 microLEAP, an Islamic and conventional P2P microfinancing platform, announced today it has raised a total of US$3.26 million (RM13.25M) in equity and other modes of financing from Malaysian investment holding company MAA Group.

The round comprises RM1.25 million in equity and RM2 million advance, besides a separate RM10 million, which will be invested across all of microLEAP’s available Islamic and Conventional Investment Notes.

microLEAP will use the funds for advertising, promotions, hiring staff and tech enhancements.

The Malaysia-based fintech company serves micro-enterprises that may find it difficult to borrow money via traditional means. What makes the company unique is that it provides borrowers access to micro-financing through both Shariah-compliant means as well as conventional funding.

A largely Muslim-populated nation, Malaysia is seeing a steady growth for Shariah-compliant financing, which refers to funds that adhere to Islamic teachings with resolutions issued by the Shariah Advisory Council of the Securities Commission of Malaysia (SACSC).

This is evident from the growth of its Islamic Investment Notes/Islamic Financing offering, which it claims to have grown more than 1,000 per cent within just five months of its launch in April 2020.

According to the founder, the reason for this success is because microLEAP does not charge additional rates for Islamic funds in comparison to conventional funds, as it absorbs the Commodity Murabahah brokerage fees.

“On microLEAP’s platform, where we are the first platform to be able to do both Islamic and conventional P2P financing, Islamic is more popular. In fact, our Islamic financing is 92 per cent vs eight per cent for conventional financing,” CEO Tunku Danny Nasaifuddin Mudzaffar told Salaamgateway.

One can borrow between RM1,000 (US$250) and RM50,000 (~US$12,300), with free basic debt management, accounting, online training and complimentary personal accident insurance being provided.

It also requires a business to be in operation for only six months for it to be evaluated, and absorbs the Islamic Commodity Brokerage fee, which eases the burden for micro-businesses while donating the late payment fees to charity.

Tunku Yaacob Khyra, Executive Chairman of MAA Group, said that there is an unattended need for many small businesses to remain afloat which is why the company will be focused towards providing added benefits that can be accessed easily by MSMEs.