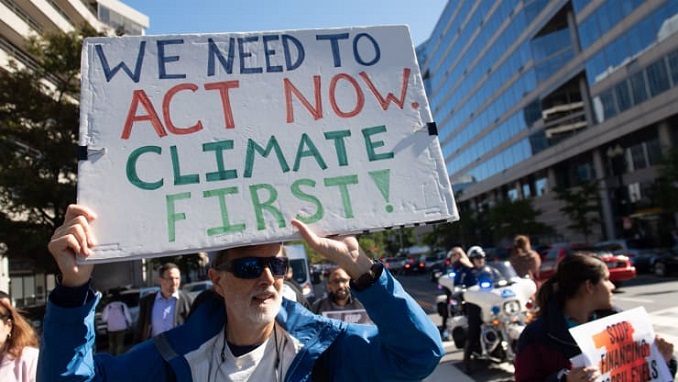 A green revolution has been promised before, but if the latest data across all asset classes is to be believed, this time it is here to stay.

Whether it’s in equities, government bonds, ETFs (exchange-traded funds) or hedge funds, investors around the world are demanding socially and environmentally conscious options.

In a letter to CEOs last month, BlackRock CEO Larry Fink said climate change has become a “defining factor in companies’ long-term prospects” with a significant reallocation of capital on the horizon a lot sooner than expected. And the numbers appear to back him up.

“For the first time since WWII we sense a shift in which climate and the environment — not growth — will become the priority of governments and their citizens, as shortages of food, clean water and air become existential questions,” Saxo Bank Chief Economist Steen Jakobsen said in his latest quarterly outlook report.

Germany is unveiling plans to move entirely from coal to renewable energy by 2038, while China is the largest manufacturer and buyer of electric vehicles in the world. But the push toward ESG (environmental, social and governance) investing is not just about the potential returns, as consumer

A study published in January by Augustin Landier of HEC Paris Business School, Jean-François Bonnefon of Toulouse School of Economics, and Parinitha Sastry and David Thesmar of MIT Sloan, showed that investors are willing to pay $0.7 more for a share in a company giving one more dollar per share to charity.

The study also revealed that firms exercising a negative social impact were valued at $0.9 less per share than those considered socially “neutral”.

“Our study is motivated by the classic policy debate on corporate social responsibility,” Landier said.

According to recent ETFGI data, ESG ETFs represented $52 billion of the $6 trillion global assets under management (AUM) of the ETF market.

However, the 2020 Global ETF Investor Survey from U.S. private bank Brown Brothers Harriman (BBH) estimated that nearly 74% of global investors plan to increase their ESG ETF allocation over the next year.

In five years, almost one in five investors said they would allocate between 21% and 50% of their portfolio to ESG funds, and BBH concluded that ESG “doesn’t appear to be a passing fad”.

An ETF is an investment fund traded on stock exchanges, much in the same way as stocks. ETFs hold equities, commodities or bonds and generally carry an arbitrage mechanism to keep it within range of its net asset value.

There were a record number of issuances for green bonds last year as firms, financial institutions and governments raised $185 billion in total to fund environmentally sustainable projects, according to data from law firm Linklaters.

“Since first appearing in 2007, the market for green bonds has attracted significant interest in recent years as sustainability issues rise up the corporate agenda, following pressure for companies to reduce their environmental impact, and following the introduction of increased regulation in the area,” Linklaters capital markets lawyer Amrita Ahluwalia said.

2019 saw a total of 479 green bonds issued worldwide, up by a quarter compared to the previous year, and 2020 is set to be a “bumper” year for green bonds, driven by a new set of standards in Europe and an uptick of activity across Asia, according to Linklaters.

The EU recently agreed a set of guidelines to define sustainable investments. Although not slated for implementation until 2021, the new rules are aimed at curbing “greenwashing”, the practice of governments and companies misrepresenting environmental benefits to seduce ethical investors.

Chinese issuers accounted for $15.4 billion of new green bond issuances in 2019, and Asian investors are expected to turn greater attention to sustainable investing in order to keep pace with established markets.

China, the U.S., France and Germany dominated the green bond market in 2019, accounting for 40% of all proceeds globally, while Sweden was crowned the green bonds “hotspot”, having recorded 78 new issuances in 2019, 24 more than either the U.S. or Japan in second.

The AIMA and KPMG conducted a survey of 135 institutional investors, hedge fund managers and long-only managers with total AUM of $6.25 trillion across 13 countries, and found that 84% of managers reported an increased interest in ESG-orientated funds and strategies over the last 12 months.

Growing investor demand (72%), alignment with corporate values (37%) and evidence of material sustainability (35%) were the main three drivers behind increased adoption of ESG strategies. Notably, 44% of institutional investors surveyed said their allocations to ESG-oriented hedge funds were driven by the opportunity to generate alpha and manage fat-tailed far-off risks.

“Thus, the traditional risk-return equation is being rewritten to include ESG factors. In the hedge fund industry, ESG has gone from being a nice-to-have to a must-have,” said Anthony Cowell, KPMG’s head of asset management in the Cayman Islands and co-author of the report.