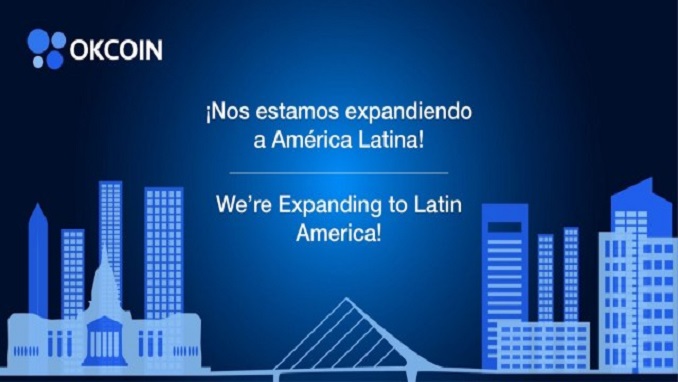 It has only been a while since OKCoin expanded to the United States, and now the company has announced its expansion to Latin America.

In a press release published recently the company said that it will establish a new platform for the Latin American market that will allow users to trade cryptocurrencies with local fiat currencies. Interestingly, the development has come shortly after OKCoin received the license to operate as a fully authorized platform in the region.

To get started, users in Argentina can deposit their local currency (Argentine Peso) to the new platform. The deposited money can be traded later for any of the cryptocurrencies available on the platform. The office will be opened in Buenos Aires, and other Latin American currencies will also be supported over time. Commenting about the development Mr. Tim Byun, the CEO of OKCoin USA, said:

“OKCoin is committed to opening up new markets for digital currency consumers throughout the world, and we are very excited to bring our safe, secure and licensed trading platform to consumers in Argentina. This is just the beginning of our Latin American expansion, as we’re aiming to grow throughout the region by bringing institutional and retail traders there an array of trusted trading options so they can buy and sell with confidence.”

Founded in 2013, OKCoin supports USD to crypto conversion from anywhere in the world. Before China’s ban implemented earlier this year it was the largest cryptocurrency exchange operating there. But after the ban it decided to increase focus on other markets and started expansion to other countries.

This has led to the company increasing its footprint in South Korea, United States and now in Latin American region. Notably, other exchanges are also on an expansion spree nowadays. OKEx, Huobi, Binance – all are busy in expanding to newer markets. Most recently Huobi was heard expanding to Russia, while Binance announced its foray into Uganda and Liechtenstein.

Now it will be interesting to see which other countries/regions become the next expansion targets for OKCoin.