Banks in the Arabian Gulf could be forced to scrap 2020 dividends as profits plunge this year due to the coronavirus pandemic, which could also drive consolidation in the longer term, analysts said.

The region’s lenders are unlikely to require additional capital should loan defaults soar, despite facing headwinds related to the impact of COVID-19 and lower oil prices.

The 23 banks in the Gulf Cooperation Council, or GCC, that S&P Global Ratings covers had assets totaling $1.5 trillion at 2019-end and can absorb up to $36 billion in extra provisions before their capital bases start to erode, according to the ratings agency.

“For the GCC in general we now expect a deterioration in asset quality indicators in all countries, potentially with NPLs [nonperforming loans] doubling in 2020,” Mohamed Damak, senior director and global head of Islamic finance at S&P Global Ratings, said during a webinar in April.

“Banks’ capitalization will continue to support their ratings. We view this crisis as a profitability event rather than a capital event … Banks in the GCC are among the most profitable in the world,” said Damak, highlighting lenders’ high efficiency, strong margins, low cost of labor and little taxation.

First Abu Dhabi Bank PJSC, or FAB, posted a slight decrease in its first-quarter 2020 total capital ratio, according to S&P Global Market Intelligence data. The UAE’s largest bank by assets had a total capital ratio of 15.40% in the first quarter of 2020, versus 16.00% in the same period of 2019.

Qatar National Bank (QPSC), or QNB, the Middle East and Africa’s largest bank by assets, posted a total capital ratio of 18.40% in the first quarter this year compared to 18.52% in the prior-year period. Emirates NBD Bank PJSC’s total capital ratio was 17.94% as of March 31, 2019.

“The banks should be able to navigate the current situation relatively well — they’re generally well capitalized. Banks will survive, but profitability will be significantly reduced and in some cases they’ll have to cancel dividends for 2020,” said Elena Sanchez-Cabezudo, head of MENA financials, equity research at EFG-Hermes in Dubai, without specifying which banks are most likely to cut payouts.

The MSCI GCC Banks Index fell 18.2% in the first four months of 2020 versus a drop of 16.0% in the broader MSCI GCC Countries benchmark over the same period. As of April 30, the bank index offered a dividend yield of 5.16%.

“Dividends in the GCC are very important because of the shareholding structure where families are often the biggest shareholders,” said Sanchez-Cabezudo.

Dividends are alsoo a key source of income for governments and state-linked entities that have controlling stakes in most major Gulf lenders, boosting state coffers in a region where there is no income tax.

A significant deterioration in the finances of some banks could spur a second wave of consolidation among Gulf lenders following several intra-country takeovers in recent years, Damak said.

Under the first wave, FAB was established in 2017 and Saudi British Bank merged with domestic rival Alawwal Bank in 2019. Saudi Arabia’s National Commercial Bank, the kingdom’s largest by assets, scrapped a mooted union with Riyad Bank in December.

Bank analysts were more skeptical, citing a lack of plausible potential takeover targets in Gulf countries except for the UAE. Nevertheless, as a federal state of seven emirates, cross-emirate mergers have proved rare.

“At this time, no banks are thinking of merging — it’s such a challenging year that this isn’t on the agenda — but the smaller, weaker banks will probably be in an even weaker position and so could trigger some consolidation in the long term,” said Sanchez-Cabezudo. “Further consolidation would probably be limited to the UAE, which is still quite overbanked,” she said. 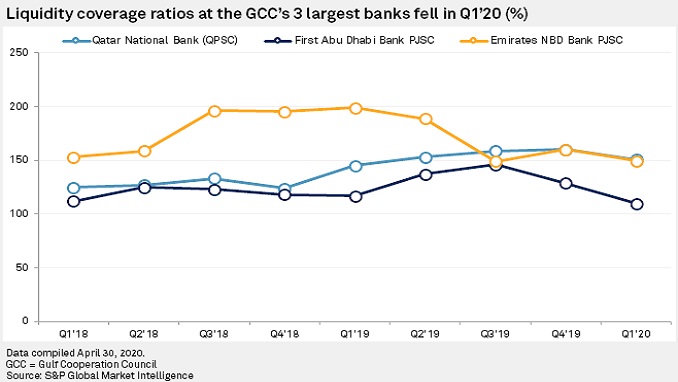 GCC banks are liquid, with liquidity coverage ratios, or LCRs, comfortably above the Basel III minimum of 100%. Both QNB and Emirates NBD recorded an LCR of around 150% in the first quarter of 2020.

“Gulf banks are well capitalized, and their liquidity numbers are good because the central banks have required them to have conservative loan-to-deposit ratios,” said Chiro Ghosh, vice president for financial institutions at Bahrain’s SICO Bank. “Overall, Gulf banks are better placed to weather the storm than banks in other regions.”

S&P Global Ratings estimates credit losses could take up to three years to be felt on Gulf banks’ balance sheets. On average, the region’s lenders can absorb up to 2.7x their normalized losses, although there is a wide variance among the banks that Ratings covers.

Saudi banks are the most resilient and Bahraini lenders the least, S&P Global Ratings said. Kuwaiti banks’ large real estate exposure makes them more vulnerable than their counterparts in Qatar or the UAE.

“This year will be very bad, and things might not have fully normalized in 2021. There could still be issues with credit quality going into next year,” said Sanchez-Cabezudo.

“When interest rates are low, as they are right now, banks’ margins shrink, but the banks are able to offset this decline by increasing lending volumes, while lower interest rates usually also mean NPLs are lower,” said Ghosh. “But in current circumstances, they’re unable to do that because of the economic slowdown. Therefore, they will mostly see a strong impact on Gulf banks’ profitability.”