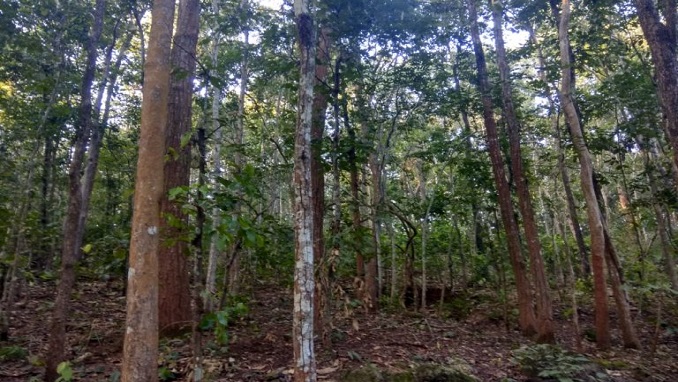 What is the best strategy for increasing green cover outside recorded forest areas? Leasing of wasteland to the corporate sector for re-greening is among the major recommendations that a report by an expert committee formed by India’s Ministry of Environment, Forest and Climate Change (MoEFCC) has suggested.

The committee has also recommended “evolving business models for tree cultivation” supported by “rationalised policy and regulatory regime, including those of felling and transit, insurance,” issuance of green bonds, development of appropriate public-private partnership (PPP) models involving the private sector and forest corporations.

It also called for an amendment of the Indian Forest Act 1927 for “revisiting the definition of forest produce” and “issuance of a pan-India transit pass for agroforestry produce.”

India aims to increase the contribution of TOF (trees outside forests) in meeting the goal of having 33 percent of India’s geographical area under the forest and tree cover (FTC), achieve the Intended Nationally Determined Contribution (INDC) targets of creating an additional carbon sink of 2.5 to 3 billion tonnes of carbon dioxide equivalent through additional forest and tree cover by 2030 and improve the farmers’ income and reduce the trade deficit in wood. To address such issues, the MoEFCC in January 2018 formed an expert committee to suggest ways to increase green cover outside forests.

The report of the committee led by Abhijit Ghose, a retired Indian Forest Service officer, was recently made public by the MoEFCC. It observed that “most of the experts agree that achievement of NDC will require more action on non-forest lands than the forest lands” but to “create the targeted additional carbon dioxide sink, actions on forest and non-forest lands will be equally important.”

“Actions to achieve the NDC would require action on both forest lands and non-forest lands. On forest lands in terms of rehabilitating the degraded forests and improving other forest areas, and in respect of non-forest lands by creating additional tree cover through agroforestry, farm forestry, urban and peri-urban forests, roadside avenues, etc,” said the report.

It further emphasised that action on non-forest lands will have many “spin-off benefits including improving the income of the farmers” and this may provide an “opportunity to create viable business models for farmers to get more income from tree cropping and cultivation of NWFP (non-wood forest products) and marketing the produce to get additional income and simultaneously meeting the requirement of the industry and the community.”

“If recommendations contained in the report are followed in letter and spirit, the present trade deficit in wood and wood products in the country will be significantly reduced,” the report stressed.

The report called for ways and means to access funding mechanisms to boost the efforts of the government. It suggested, “development of business models of tree cultivation on a pilot basis to wean the practice away from project funding to create self-sustaining market models.”

It advocated for “evolving business models for tree cultivation to be supported by rationalised policy and regulatory regime, including those of felling and transit, accreditation of QPM (quality planting material) nurseries, and mandatory use of certified QPM.”

“Development of appropriate PPP models involving the private sector and forest corporations and issuance of green bonds,” recommended the report.

The report suggested other measures like setting aside a “fixed proportion of national highways and expressways projects for greening roadsides by responsible agencies” and “innovative ways of generating financial incentives, for example, by developing and establishing a carbon registry.”

The report recommended “leasing of wasteland to the corporate sector for re-greening following proper safeguards for local communities and wildlife.” However, a section of environmentalists expressed displeasure with the report as they feel it is not the first time that an attempt is being made at bringing in the private sector.

“It is not the first time that there is an attempt to bring in the private sector. The report is not very clear about the land that will be targeted to give access to the private sector. The main question is about the land use. Where is the land to achieve the 33 percent target? Besides land under food production is usually the common lands used by the poor which is classified as ‘wastelands’. There is no such thing as wasteland in this country yet different departments keep making plans for putting it to different uses. Is this report targeting the conversion of food producing land to tree plantations? If it is then it is absolutely ridiculous,” environmentalist Madhu Sarin told Mongabay-India.

“It also discusses – something they have always been talking about – handing over the so-called wasteland to private companies. Former prime minister Indira Gandhi herself had said that the forest development corporations had become forest destruction corporations and till today villagers in Maharashtra and Chhattisgarh have been protesting against the destruction of rich natural forests by them for teak plantations. Instead of winding them up, it is surprising that they are expected to partner with the private sector to improve forest productivity. They work for everything and everyone else but forests,” Sarin emphasised.

Meanwhile, the report called for “rationalisation and easing out of felling and transit prescriptions on wood and wood products coming from agroforestry, farm forestry and tree cropping areas.” However, the committee is convinced that if implemented the report can be a game changer for the sector.

“I sincerely hope the suggestions/recommendations made in the report may be of far-reaching consequences in the long run and agroforestry will be a real game changer for both agriculture and forestry sectors of India. Adoption of agroforestry in a large scale will ensure the expansion of TOF and gradually India will be a country of the net exporter in wood and wood products from its present status as a net importing nation in wood resulting in a huge savings of our foreign reserve currency,” said Abhijit Ghose.

He explained that due to increasing demands and scarcity of forest produce, tree outside forests (TOF) has assumed a greater importance in the national economy and India is not an exception to it. He stated that in the last two decades, TOF has significantly buffered the pressure on our declining forest resources and has catered to the burgeoning need of domestic biomass as well as escalating demands for industrial wood.

“India, primarily being an agrarian economy needs to focus on climate resilient farming in a big way on the face of uncertainty of monsoon rains besides diversification of farming through the practice of other land-based activities like agroforestry, diary, livestock rearing, beekeeping, pisci-culture and different livelihood alternatives, which will enable our farming community to enhance their family income,” Ghose said.

“Like in many other countries, agriculture and forestry are separated institutionally in India and because of this historic separation between these two important land uses, agroforestry is increasingly emerging as a huge source of innovation in both farming and forestry. Therefore, the growth of agroforestry in India is considered as a win-win situation for both the agriculture sector and forestry sector,” he stressed.

It is not the first time that there has been an attempt for entry of the private sector in the forestry sector. Earlier this year, the draft of the India’s new national forest policy had also come under criticism for emphasis on industrial timber.