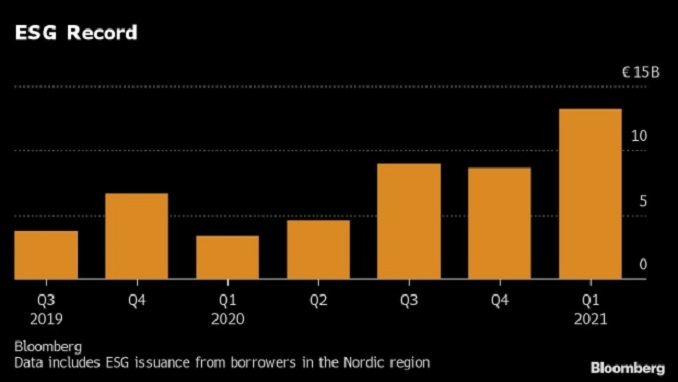 Investors in the Nordic region are increasingly having to sacrifice diversification if they want to buy into a sustainable debt boom.

Sweden’s real-estate industry is behind roughly half the country’s traded debt, much of which is issued under a climate-friendly label. Jyri Suonpaa, a green bond manager at Alandsbanken, says he finds the development “worrying.”

Suonpaa is keen to see “more issuance from basic industries” but says “a lack of clear rules” such as the European Union’s taxonomy is still hampering new supply. That’s despite the enforcement of the EU’s sustainable finance disclosure regulation, which took effect on March 10.

Nordic borrowers sold more than 13 billion euros ($15.3 billion) of bonds tied to environmental, social and governance goals in the first quarter, a record amount, according to data compiled by Bloomberg.

“ESG is now firmly a key strategic focus area for all large Nordic corporates,” said Povl Bak-Jensen, head of the bond syndicate desk at Nordea Bank Abp, which arranged most of the region’s deals, including in green bonds.

Companies are flooding the market with issuance because “there is a long-term strategic benefit and most often also a concrete greenium saving to be had,” the syndicate banker said, referring to the premium associated with green debt.

Much of the demand for Sweden’s real estate bonds comes from the Riksbank, which added corporate debt to its quantitative easing program last year. So far in 2021, property bonds accounted for more than half the 1 billion kronor in purchases made by the central bank.

On Wednesday, the bank revealed that those bonds have roughly the same carbon footprint as debt issued by the manufacturing and construction sectors.

But for some investors, Swedish real estate isn’t worth the risk. SEB’s Mikael Anttila, who manages one of the largest corporate-bond funds focused on Sweden, says he’s running a “significant underweight” in the property sector, which represents about 10% of the portfolio holdings.

“The prospects for real estate companies can be difficult so typically we avoid that in funds where we have Swedish krona corporate bonds,” said Anttila, whose Foretagsobligationsfond has 12 billion kronor of assets.

An added worry for Alandsbanken’s Suonpaa is that borrowers might inflate their green credentials. “I am a little bit afraid of greenwashing in new issues,” the investor said.

That’s a particular concern if companies rely on ESG bonds to refinance old debt. “How can I as an investor be sure that the old debt, which is now being refinanced with a green bond, does align with the current principles? My answer is no, it can’t,” Suonpaa said.

“In my thinking, I had to pass on that deal.”