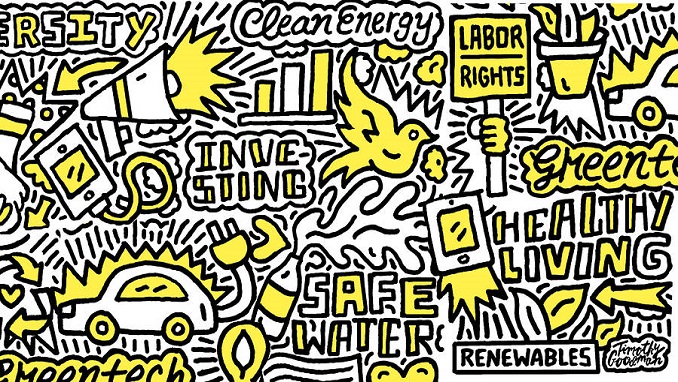 More than any previous generation, millennials are likely to invest in companies that mesh with their social and political concerns—from clean energy to gender equality to water conservation. Some 77% of high-net-worth millennials currently own or are interested in so-called impact investments, according to a 2018 survey by Bank of America.

Now a wave of startups is rushing to capitalize on the trend by offering the mobile-first generation a host of new financial-tech products that cater to their social-investing preferences.

At the top of the offerings are smartphone applications that allow investors to choose portfolios that have themes representing different causes—often very focused causes, such as companies with ethical practices in their supply chain or a higher share of women in leadership compared with their peers. In some cases, people can also tweak their portfolios easily, dropping an offending stock with just a tap of the screen. And all of the transactions can be done without calling in a broker or adviser, usually for fees that are lower than those pros charge.

Though many of the apps are still getting off the ground, they are seeing rapid growth, and are expected to grow even more as socially conscious, digital-savvy millennials accumulate wealth, adding an expected $11.6 trillion in assets in the U.S. alone over the next decade, according to the Deloitte Center for Financial Services.

The impact-investing apps are at the intersection of two major investing trends: the rise of investing apps and the growth in the sustainable-investing sector. Last year, there were 12,903 Android and Apple apps globally that mentioned investing in their descriptions, up from 8,900 in 2015, according to data compiled for The Wall Street Journal by Priori Data, a market intelligence firm.

Meanwhile, the sustainable-investing sector rose to $30.7 trillion in assets in developed markets in 2018 from $22.9 trillion in 2016, an increase of 34%, according to the Global Sustainable Investing Alliance.

Impact-investing apps are picking up an increasing portion of that growth. Android and Apple investing apps that advertise some form of sustainable offering gathered around 24 million downloads in 2018, nearly doubling since 2015, according to Priori Data. And they punch far above their weight: Those 24 million downloads represent 5.9% of total investing-app downloads, even though those apps make up just 1.4% of the overall investing-app category.

Of course, apps aren’t the first offering aimed at simplifying investing for socially conscious customers. Sustainable-investing products first appeared over a decade ago, such as mutual funds that screened out industries such as weapons, tobacco and fossil fuels. Since then, the industry has come up with a wider variety of sustainable funds and portfolios for investors. And now the apps are trying to take the idea further with much more focused offerings and a simplified investing process.

One question about the apps is performance. Most of the apps don’t have a long record by which to judge them. But some investing experts point out that portfolios built around themes don’t offer the same diversification as funds or strategies that track benchmarks like the S&P 500. So, themed investments may underperform the broader market if their sector cools off—but they may also beat the market if their sector heats up.

Still, many sustainability investors say that they’re willing to trade some returns for social impact. And some sustainability proponents argue that the conventional wisdom misses a crucial point: The business world is changing and moving toward sustainable industries and practices. So, those themes will be better bets down the road.

“Thematic investing isn’t riskier. The reason people say that is because they have a hard time separating a fad from a structural shift in the economy,” says Hardeep Walia, founder and chief executive of Motif, a thematic-investing platform founded in 2010 that today has more than 300,000 users.

It offers around 180 portfolios aimed at specific trends, such as genomics and 5G technology. In 2017, it added an offering focused on the environment, labor rights and corporate governance. The environment is the most popular theme among millennial investors.

One app that embraces the separately managed account strategy is Swell, which is backed by life insurer Pacific Life. The company offers investors a separately managed account and they can select from seven portfolios—from disease eradication to zero waste to a mashup of 400 companies across industries—and they can remove up to three companies. Swell requires $50 to start an account and charges $75 for every $10,000 invested annually.

All of Swell’s themed portfolios have notched gains since their inception in 2016, the company says, but only two beat the S&P 500 for all of 2018: healthy living and disease eradication. Swell’s Impact 400 portfolio, which is a more diversified offering containing 400 companies aligned with the United Nations Sustainable Development Goals, made its debut during 2018 and also ended above the S&P 500.

Millennial investors “see firsthand that there is a collective group that actually wants to address these environmental issues,” says Dave Fanger, founder and chief executive at Swell, which manages around $35 million from more than 15,000 clients, up from around $17 million from 4,000 clients a year ago. More than half of its investors are under the age of 34.

Launched in 2016, OpenInvest is another platform that uses separately managed accounts, building portfolios aimed around issues such as reducing carbon emissions, supporting ethical supply chains and fighting deforestation. As with Swell, if investors don’t like a company in their portfolio, they can remove it. The platform lets users mix and match causes they care about to design their portfolio around their values.

“I basically got to build my own fund,” says Alex Martin, a 30-year-old fintech professional who began using OpenInvest in 2016. He built his Roth IRA retirement portfolio around issues the platform targets, but then customized it over time by removing stocks he didn’t want. Now he is notching gains above the S&P 500, he says, but he adds that he would stay with impact investing even if that changed.

OpenInvest, which counts 60% of its users as millennials, requires a minimum of $100 to start an account and charges an annual fee of $50 for every $10,000 invested. The startup declined to provide its assets under management or number of users, but says assets have grown roughly 10-fold year over year, and users have tripled per year, since launch. The average account holds $25,000.

One investing app that heavily uses ETFs is Stash. Since launching in late 2015, the app has ballooned to more than three million users, with an average age of 29 and most of them new to investing: 86% of users identify as first-timers or beginners. The initial deposit to start an account is $5, and fees begin at $1 a month, plus the fees of individual ETFs. Stash declined to provide its assets under management.

The app isn’t solely focused on impact investing, but six of around 59 themed ETFs to which it directs users are in the “missions and causes” category. Those ETFs include BlackRock’s iShares Global Clean Energy ETF, which focuses on renewable-energy businesses, and State Street ’s SPDR SSGA Gender Diversity Index ETF, which invests in companies with a higher ratio of female executives and board members, compared with their peers.

As of January, 12% of the app’s users were invested in social ETFs, doubling from 6% in 2016. The company plans to introduce more sustainable options, but wants to make sure it keeps a range of choices for investors with different social views, says Brandon Krieg, chief executive officer and co-founder of Stash.

Meanwhile, old-line wealth-management companies, which helped introduce the concept of sustainable investments, have also come up with more-varied offerings to meet demand. They usually have substantially more assets than apps—but also much higher fees and minimums to launch an account.

Morgan Stanley Wealth Management, for instance, has formally offered an impact-investing service with themes such as climate change and gender diversity since 2012. It currently manages more than $27 billion of assets in sustainable solutions, with more than 120 investment strategies plus a suite of portfolios.

Investors need to contribute at least $5,000 to start a portfolio at the outset. Portfolios with investments under $10,000 are built through mutual funds, ETFs and single stocks, while larger accounts can receive separately managed accounts and alternatives. Morgan Stanley declined to disclose its fees.

“We find many clients are looking for an investment strategy that not only seeks to generate market-rate financial returns, but that also strives to deliver positive environmental and social impact,” says Lily Trager, executive director and director of investing with impact for Morgan Stanley Wealth Management.