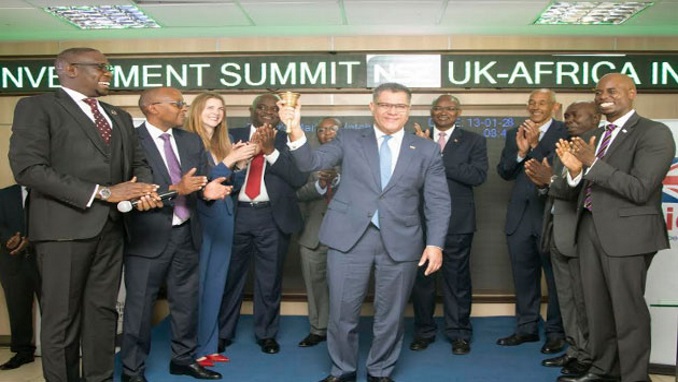 The 5-year bond, issued by real-estate developer Acorn, will be listed in three tranches with the newly listed first tranche floated at Sh786 million.

Green bonds seek to raise capital for sustainable projects, for example, in renewable energy, Eco-friendly transport, energy efficiency, and wastewater treatment. The bond, which attracts a 12.5 per cent interest annually, is waiting for “final approvals” to cross list next week on the London Stock Exchange (LSE).

Speaking at the listing, the UK Secretary of State for International Development Alok Sharma described the listing of the green bond that is supported by the UKaid as a “landmark for Kenya”.

“I recognize the role that capital markets can play in creating jobs and driving forward the economy and that’s what this transaction is all about,” he said.

The Central Bank of Kenya (CBK) Governor Patrick Njoroge hailed the bond adding that Kenyan banks had committed to sustainable financing especially after the signing of the banking charter last year.

“In the future all the financing will be green,” said Njoroge.

Acorn Housing has since 2015 being developing accommodation units for students and is the developer of Qwetu residences. Acorn CEO Edward Kirathe said that bond would help them add 5,000 beds in Nairobi within three years’ time.

“Young people have the greatest need for housing in Africa and affordability is a big issue,” said Kirathe.

NSE boss Geoffery Odundo said that the bond, which is a secondary listing, would act as a catalyst for the bonds market, which had slowed down in the recent past. “We think the green bond is going to create a new interest in the market,” said Odundo.

He projected that international investors and local private equity funds would be the early investors for the bond. Before the listing, Acorn was looking to raise a minimum of Sh2 billion and a maximum of Sh5 billion.