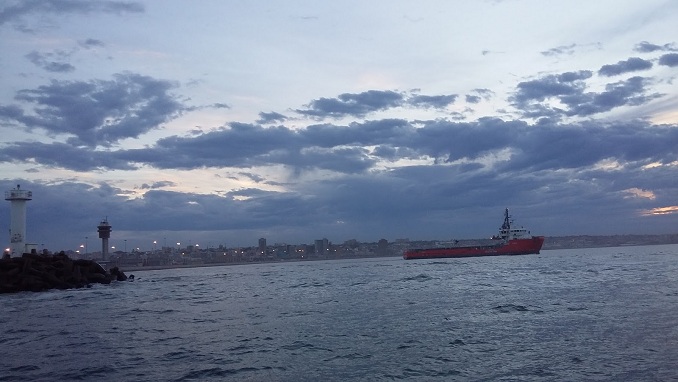 A latest scandal on SAMSA’s licensing in the Algoa Bay region includes the involvement of global commodity trading Trafigura, which owns a 51% local firm called Heron Marine, the company caught up in the scandal.

How the firm got the third license from SAMSA is in the heart of a controversy which also may have gotten the head of the South African Maritime Safety Authority (SAMSA), Sobantu Tilayi, replaced from his position earlier this year.

Tilayi’s demotion coincided with audits oflicenseesin South Africa’s new offshore bunkering business, in which barges refuel ships in Algoa Bay. Trafigura has been previously blocked from bunkering operations in South Africa due to concerns about its global track record.

Since the advent of Very Large Crude Carriers (VLCC) in the late 1960s Algoa Bay is the only anchorage on the South African coast where Ship to Ship Transfers (STS) of oil have been permitted. Algoa Bay is the only protected anchorage from a meteorological and holding ground perspective with the prevailing westerly winds and swell. These oil transfers, up to 300,000 tons per vessel had to be undertaken due to hull damage to the vessel.

In 2019, a company called Colt Marine became the third supplier to be awarded a licence to supply in Algoa Bay, which will give shipowners more options, and one of the conditions was for the company to conclude its agreement with Trafigura, which at the time was their technical partner.

Trafigura has been named or involved in several scandals, particularly the 2006 Ivory Coast toxic waste dump, which left up to 100,000 people with skin rashes, headaches and respiratory problems, and the company was also involved in the Iraq Oil-for-Food Scandal.

According to Global Ethical Banking’s sources, while having a strong presence in the country, Trafigura wasn’t involved in helping out the local community, nor did it show any interest in uplifting the South African economy, or make efforts to increase the employment of the local population.

There are now three license holders in the Algoa Bay region, Minerva, SA Marine and Colt. Currently the three licensed suppliers are servicing up to 40 vessels per month.

Unlike the case with Trafigura, other operators were granted permissions by SAMSA in far stricter procedures, some of them also obtaining bunkering licences from the Transnet National Ports Authority (TNPA) in Port Elizabeth and Coega.

Most operators have stated that they are welcoming competition and that are against any monopolies in the region. For past licensees, SAMSA has highlighted the need to appreciate the value of the environment and the concerns of those living within it, as well as to maintain a dialogue with all interested parties in the industry and local communities to ensure that the integrity of their operations meet the Health and Safety expectations of the local communities and the regulatory requirements of the statutory authorities.